The Bureau of Indian Affairs (BIA) is the lead federal agency preparing a Supplemental Environmental Impact Statement (SEIS) that will evaluate the expansion of the solar field for the previously approved Moapa Solar Energy Center (MSEC), a photovoltaic (PV) solar project on the Moapa River Indian Reservation (Reservation), Clark County, Nevada. This expanded project is referred to as the Arrow Canyon Solar Project (ACSP). The Moapa Band of Paiutes Indians (Moapa Band) and other agencies will be involved as cooperating agencies for the SEIS.
​ 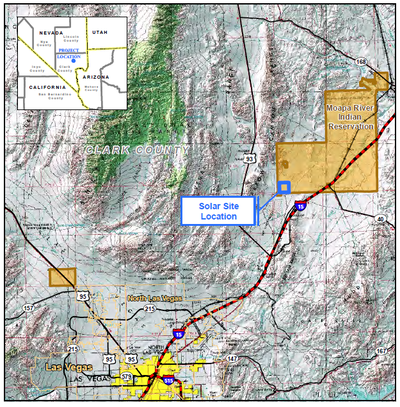 Moapa River Indian Reservation with Arrow Canyon Solar Project Location Highlighted
The proposed Federal action, taken under 25 U.S.C. § 415, is BIA’s approval of an amendment of the solar energy ground lease and related agreements entered into by the Moapa Band with the applicant allowing the expansion of the solar field previously approved for the MSEC Project. The agreements provide for construction, operation and maintenance (O&M), and decommissioning of a 200-megawatt (MW) alternating current solar photovoltaic (PV) electricity generation facility located entirely on the Reservation and specifically on tribal lands held in trust by BIA for the Moapa Band.

The solar field on the Reservation would be expanded from 850 acres to 2,200 acres and this expansion would occur on tribal lands identified by the Moapa Band adjacent to the originally approved MSEC site. The linear facilities associated with the Project, (i.e. main access road, 230kV gen-tie line, and water pipeline) were previously approved by the Bureau of Land Management (BLM) and would not change with the solar field expansion. These facilities would be developed as previously described and approved in the BLM’s Record of Decision (ROD) and the rights-of-way (ROWs) issued by the BLM. Therefore, these facilities will not be reevaluated in the SEIS.
​
Arrow Canyon Solar Project Supplemental EIS